The Maple Leaf That Didn’t Want To Die

Once upon a time, there was a maple leaf that didn't want to die.

"I have too much to live for!" it said. "I have lofty things to do, and stories to tell. There is a big change coming called Winter; I hear the fir trees whispering about it in their sylvan voices. I must see it and document it. For I am a Big Leaf and what I have to say is more important that anything in the world."

The maple leaf was so persuasive that the squirrels who lived in the branches of the tree stopped their nut-gathering and nest-building and approached the maple leaf with a plan.

"We'll help you," they said in their high, squeaky voices. "We are experts and know everything — for we have traveled hither and yon throughout the parklands; while you have only been on this one branch your whole life, since you were born last spring. We have studied for many years and therefore, know far more than you do."

The maple leaf was overjoyed that the squirrels understood his deepest desire and were altruistically going to help him live! He would not die!

The squirrels twitched their whiskers and their tails as they consulted among themselves, then ran off in all directions — except for Fluffy, Puffy, Muffy, and Robert who stayed behind.

"We are your medical administrators," they chirped in unison to the maple leaf. "We are the ones to fill out forms and process payments and file referrals and seek for donors and bill your insurance and hire new specialists and, and, and . . . "

The maple leaf felt overwhelmed and perplexed by all of this information and terminology, but he told himself it was worth every sacrifice, for he would live!

A squirrel returned, leading three stellar-blue jays, each of whom had something in his or her beak.

One had a shard of broken glass. Another had a needle from a hypodermic that some human had carelessly disposed of. The third held a long string, which dangled in loops and squiggles that danced in the wind. Then a fourth jay appeared. He carried a fresh sprig of fir needles.

"The fir tree," announced Fluffy, "has generously volunteered to be a donor for this historic, first-ever, fir-to-maple transplant . . . "

"First-ever fir-to-maple grafting," Fluffy continued, with an irritated expression on his furry face. The facial expression would have been difficult for humans to decipher, but squirrels know the way of squirrels. Robert interpreted the irritation to mean his boss had a weak spot, a touch of insecurity. Robert was vying to move up the corporate ladder in this booming, new, medical-industrial complex, and this triumph would carry him higher. His name would go down in history: "Robert, the inventor of the maple/fir graft!"

Well, if you have ever worked in an office, or had occasion to visit one, you can imagine the rest from here. So I won't go into every little detail of the back-biting and money-grabbing and reputation-building that went on in the ever-growing community of squirrels, jays, then crows and moles and even the spiders who were trying to cash in on this. For of course everything had a price, and a reasonable profit to be made each time a product changed hands.

The poor maple leaf who wanted to live took out a mortgage to pay for it all. And the "all" was an ever expanding total that got bigger and bigger.

The fir sprig was grafted onto the maple leaf in an ingenious operation involving the cutting edge of technology.

The maple leaf felt horrible, what with the holes poked in his stem and that resinous stuff gunking up his system. But, he kept telling himself that it was all worth it. After all, this was an issue of life or death. And death was to be avoided at all costs, no matter how arduous or painful.

The squirrels' nest was filling with nuts that the squirrels themselves did not collect.

"This medical administrating business is a heck of a lot more profitable than collecting our own nuts," they congratulated themselves in the evening, as they reclined in their nest made of already dead leaves, lined with the softest and spongiest moss, decorated with the rarest, downy feathers, and filled with a hoard of only the finest nuts of select trees from all over the land. All of this luxury was brought to them, item by item, by subcontractors as their processing fee for getting certified as "Approved Providers."

The squirrels rubbed their white bellies in contentment and groomed each other's grey fur.

"You're getting fat," Fluffy said.

"So are you," Muffy said with a sniff and a frown.

Since they no longer ran around to forage for their own food, and never left the big, old maple tree, they needed more exercise.

They needed a gym.

So, ingenious crows built the administrators aerobic workout devices in the branches of the tree. For of course, the squirrels were far too important and busy to leave their work of administrating the medical care in this dire, life-or-death situation of the maple leaf that didn't want to die.

One day, an artist went for a walk in the woods. She sat on a fallen log and admired its texture as it weathered in the forest. The skin of bark had long ago decayed back into nourishment for Pachamama to share with all of life. The bole’s skeleton was beautiful as grubs consumed it. The grubs enjoyed its flavour then cast it, reformed, back into the soup of life.

Dead leaves crunched under the artist's feet as she shifted her position. The scene glowed amber before the fall of early night. Autumn was her favourite season of the year, so quiet and introspective.

She scratched pencil-point over paper for several minutes.

Suddenly, the artist was startled by a noise. A strange sight greeted her eyes. An unexpected conglomeration of wildlife scurried by; a convoy of moles, wood-rats, hares, and other small creatures hurried along, each carrying something. Jays and crows flapped overhead. The birds toted strange objects in their beaks.

Startled by these unusual sights, the artist arose from her magnificent tree-corpse to follow the animals and see where they were going.

She came upon a path much trodden with all shapes and sizes of feet, paws, and slithering bellies. The path led to a maple tree.

And what an odd tree it was. The artist frowned at the sight. Her heart felt sad when she gazed at the overweight squirrels running in suspended hamster wheels dangling from skeletal limbs. Other arms of the maple bent low with the weight of the biggest squirrel nests she had ever seen. At any moment, the branches could snap from the burden.

All of this feverish activity of forest critters running, flying, and crawling up and down the tree went to — and originated from — a certain point on a certain twig from which dangled a lone maple leaf.

And what an odd leaf it was.

A multitude of metal devices fastened the leaf to its twig, while a massive tangle of hoses and pumps transported green fluid into its tender, arboreal veins.

The leaf was alive, yes.

"But what kind of life is this?" the artist asked aloud. The stillness and beauty of the autumn day was destroyed for her.

The artist turned and walked away from the chaos and hubbub extending the life of that leaf beyond its season. Her footsteps crunched on the crisp corpses of the leaf's fallen comrades.

Later, she sat at her drawing table. She finished the sketch she'd started while sitting on that log in the woods, bathed in the golden light that is only seen once the trees have shed their leaves.

Thoughtfully, the artist rose, went to the kitchen table and looked at her assortment of amber-coloured, plastic jars with childproof caps, each of which was to treat the side effects of one of the other medications.

"What do I need with all this?"

With a sweep of her arm, she pushed the jars into the trash. 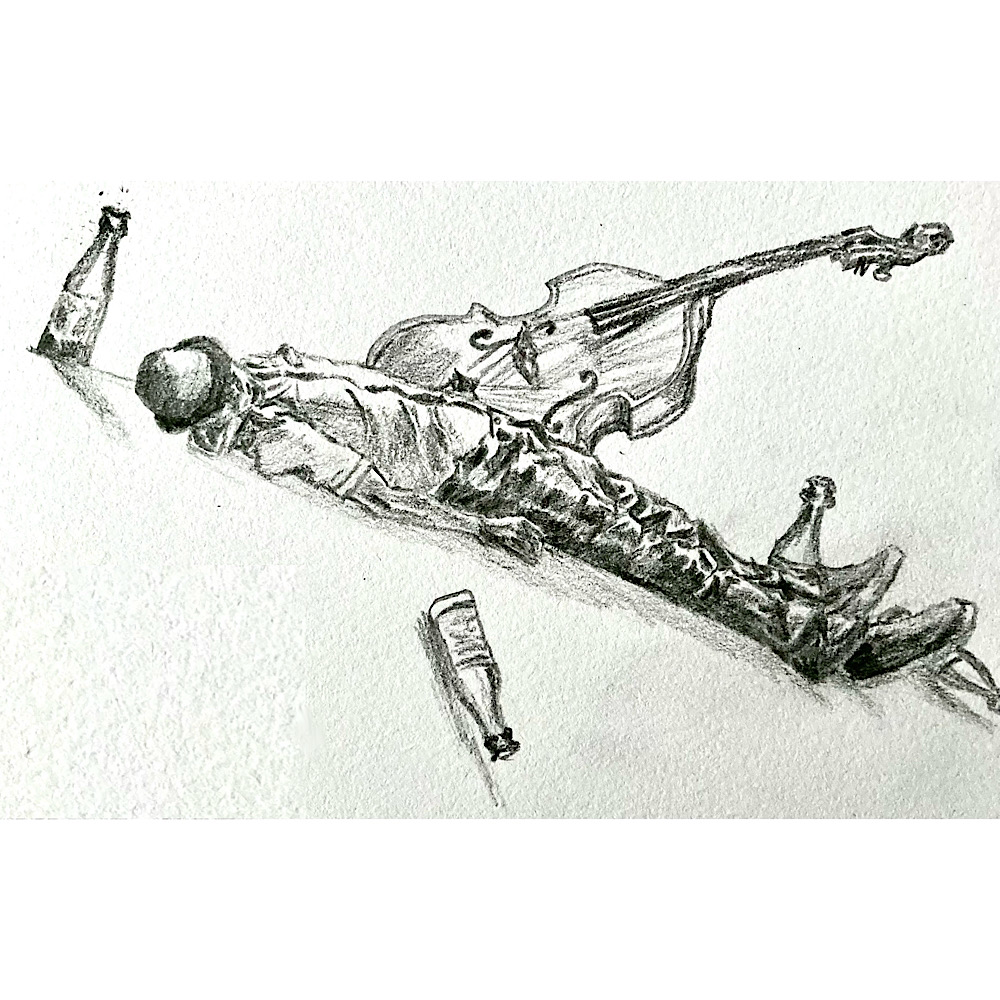