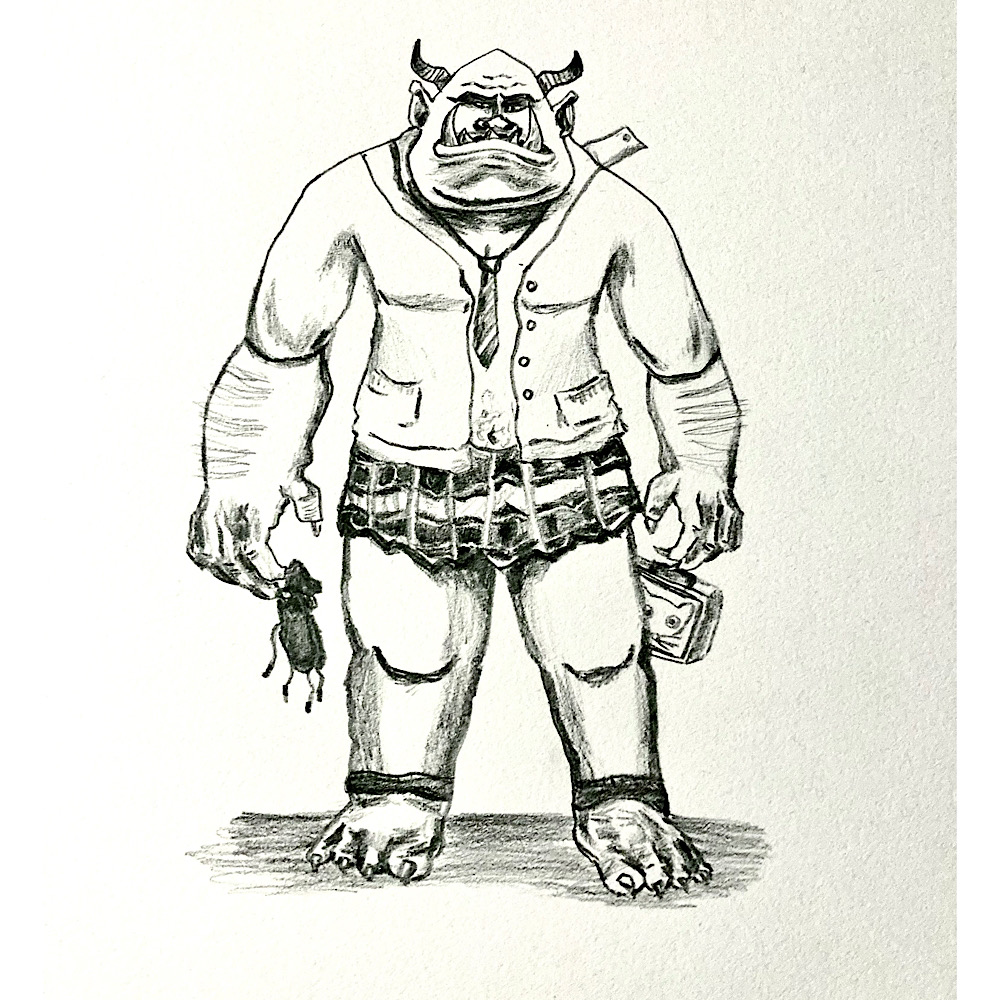 
There was a little contradiction in this story and it could have done with more proofreading, but the idea of Centipede Suzy was unique and terrifying as well as tragic. I love weird urban legends, especially ones invented for stories such as this.


Genie Meets a God by the Brook by A. L. King


I liked the narrative voice’s surreal, detached humour in this, and the main character, Genie Doltry’s calmness in the face of her fear. I enjoyed the way her character changed over the story’s course.


This one was pretty crazy and one of my favourites. I liked the description of Detective Wart at the beginning and the humorous conversation with Detective Cuddy (while staring at a dead body, obviously). I liked Colin’s character and the way the narrator addresses the reader as if sharing a secret. There was something similar to Spike Milligan’s works in the story’s tone and humour.


Spa Day with the Devil by Keith Kennedy


This was an interesting story, although it wasn’t of the horror genre (in my opinion. ) I liked the retelling of the story of the Devil, Adam, Eve, and Lilith. The story needed more proofreading - at one point the name “Amy” is replaced with “I” though the rest of the tale is told from the third person POV.


The Goat by Keith Kennedy


I also didn’t understand how this story was horror (rather than just erotica) but it became a horror story towards the end. I found myself rather exasperated with Garrison and his constant thoughts about sex and viewing women through that particular lens. In a way, he got his comeuppance, but right at the end he started to do something completely, alarmingly out of character.


I liked this one a lot. The insane character of Wade and his behaviour was fascinating. The image of the corpses in his car was a nice touch, and I liked the black humour. I would’ve liked to know more about Wade’s relationship with Stephy and more about Danny, but there’s only so much one can fit into a short story.


The Bright Spot in the Wall by T. M. Morgan


This also wasn’t exactly horror, but it was so surreal it reminded me of an episode of Black Mirror. I was sorry for Stanley (or Stan Lee) at the end.


This was another one of my favourites, because for most of the tale, I wasn’t sure exactly what was going on. However, the author showed different scenes happening that eventually added up and made sense. Mostly. I’m still unsure why Funyun wanted to wear a raccoon costume, and at one point the man who got murdered was suddenly called “Rich” by the narrator, even though the other characters hadn’t said that they knew his name.


I liked this story as well. Jeremy’s character was both chilling and fascinating as well as amusing, and I also learned a few things I didn’t know about insects.


This story had some exquisitely gory details to do with insects and larvae (also, trigger warning if you’re deathly afraid of spiders!) I found the character of Luigi the Italian lover a little stereotypical.


I liked the strange host of characters living in the woods, though the narrator was villainising liberal / vegan / people with identity issues, which I don’t personally agree with. But at the end of the story, (spoiler alert!) those identity issues were proved right, which kind of made up for that. The fight scenes were long and not always convincing (E.g. How could Stefan knee Rick in the groin with his good leg, and therefore balance on his injured leg without falling over?)


Some Girl by Aron Beauregard


This was a good one. The story begins with an unusual excerpt from one of its later scenes, which prompted me to keep reading to find out what happened. I liked the grittiness and gangsta-esque narrative voice. There were also some nifty illustrations.


The Pimple on Silverman’s Ass by Ken Goldman


This begins with a Shakespeare quote, which the idea of the story is based on. I really enjoyed this one, it was incredibly funny. It was an original idea that I could imagine Neil Gaiman writing.


The Rusty Tractor by Victor Marrow


The author of this story had definitely done research into police procedures which added plenty of realism. I empathised with Hoffman. The story needed more proofreading — at several points it slipped from first to third person, and from past to present tense.


This story had more puns and sexual innuendo than a Carry On film. It used a solid list-of-three strategy (the chocolate objects and… the consequences of those objects) which is used in the oldest stories, and that also made it memorable.


You are the Shark by Stephen Daultrey


It was told in the second person, which is a hard feat to pull off without putting off the reader. I did wonder why the narrator was so keen on literally being killed, but towards the end, his actions made more sense. It could have done with more proofreading.
Powered by