Me, My Eye, and The Things We Saw

A funny thing happened to me once:
I tripped over on the pavement – and my eye popped out.

Seriously! At first, I didn't know what had happened. I'd fallen over lots of times – in the playground, with my tray in the canteen, at Auntie Sally's funeral when I banged the box and all the old ladies cried; I was always doing silly things like that, like wandering off on my own, exploring places that I was told I shouldn't, but I did anyway.

“You're very special, and special things need to be taken special care of,” my Mum was always trying to tell me.
But this time, when I tripped... I felt weird afterwards. I looked around and my vision was double blurry. I patted my head and shook it about, but the blurriness wouldn't go away.

It was only when I stood up that I noticed something that shouldn't be there. Something round and wet, resting against my cheek.

I looked down (with my good eye) and there it was: my left eye, swaying like a white yo-yo on a string.

It was looking at my shoes, at the laces I'd forgotten to tie. Perhaps it's trying to tell me why I tripped? I thought.

I might not be the cleverest person in the world, but I do know one thing: when you have an eye that's fallen out, everything looks very strange. It's kind of like watching a broken TV which is showing two programmes at the same time; or like going cross-eyed, but one eye is always looking at the floor and you can't move it unless you swing it like a conker.

And I don't know about you, but I didn't think an eye could even get that long! My Mum was always saying that I had long eyes. I guess she was right. She was very wise.

Anyway... having tried to squidge my eye back in (for some reason, it wouldn't fit, like trying to put the toothpaste back in the tube) my next worry was what the other people on the street would think. There was me, this little person in a big city, all on my own – with an eye on the loose! If anyone noticed there'd be trouble, screaming, and pointing, and people getting excited. Somebody would call the police. My Mum would be furious. She'd tell the policemen to send me to prison! Without any tea!

So, I did the only sensible thing--
I hid the eye in my mouth.

It was a funny feeling – because there was no feeling, at least not from the eye. It was warm but didn't taste of anything – it was like putting a spoonful of jelly in my mouth. I hoped it wouldn't start to dissolve, like jelly. Or get swallowed by mistake.

If I swallow my eye and keep swallowing, will I eventually poop it out?

I walked and worried about this for a long time until I found a sign with a big map. It was peeling and covered with gum and lots of black graffiti. I didn't understand any of the words the people had sprayed, but they looked rather angry.

It was then that I noticed my reflection in the glass. There was this hole where my eye should have been, which was bad enough – but from that hole, slipping into the corner of my mouth, was a red and blue string that looked like a lace of sour candy. (Blueberry & Strawberry, probably.)

I quickly traced my finger along the map from block to block until it came to a green arrow which said “St. Peter's Hospital.” (I'd been there before when a dog bit my arm – Mum had driven very quickly and we both did a lot of crying, but I still remembered the way.) I was ten blocks from the hospital (I counted them on the map and all my fingers), so even with the eye hidden safely in my mouth, along the way people were going to notice the string and start asking “Hey, what is that? Why do you have a candy string in your mouth? And coming out of your eye hole? Hey! Get back here, you! Give us a lick! What other sweeties are you hiding in your... Arghhh! Police!”

Luckily, I had a pair of sunglasses in my pocket. They were heart-shaped, purple, and really cool. Minding they didn't get tangled with the string, I put them on and checked myself in the glass again. You could still see a bit of the string, but it was better than before. I hoped people would just think I had a tattoo or a secret monocle, or that I'd cried some candy and was cheering myself up by eating it. And anyway, if anybody asked, I'd just do some running. I was very good at that, running – except when I tripped...

I had a final count of the map and my fingers, just to be sure, then set off towards the hospital. I didn't walk too fast, as it jiggled the eye and made my head spin, and I had to be mindful of my braces, because they were new and quite pointy and the eye was bouncing against them like a budgie in a cage. To make sure the eye didn't get scratched, I kept it well-lubricated with spit by licking it – whenever I did this, a tongue as big as a whale would leap across my vision. The first time, it made me flinch and I jumped back and bumped into someone, but the next time, I found it quite funny. With all the spit and bubbles in my eyes, the city looked like it was underwater, like I was exploring Atlantis – only with honking cabs and trash bags and hot dogs and mermaids. On a corner, a big one wearing a big bra (a mermaid, not a hot dog) asked if I was looking for a “good time.” I was about to say I was looking for the hospital, then I remembered that with the eye in my mouth I couldn't speak, so I just smiled and did a run; but when I crossed the road I got confused for a moment, because I thought the ground would be all squishy like a tongue, and a big pavement I went down was crowded with lots of busy people and lots of busy teeth wearing hats and ties and pink gum suits – and they were all rushing around me and rushing inside my mouth! I thought I was going to be sick! (I wasn't – a bit of dribble came out, which I wiped away with my sleeve, but that was all.)

After three blocks (half a hand, sort of), I went down to the subway – I wanted to save time because I'd run out of spit and my mouth was getting dry. I used some of my money to buy a drink. I opened the can and sipped – the fizz stung my bad eye and made the good one water. When no one was looking, I spat the drink back into the can and put it in my pocket for later, for when the fizz had worn off.

While I waited for the train, I leant around the people on the platform and had a good look down the tunnel. The tunnel looked like a long, dark throat, cold and damp and probably sticky. There was a wobbly bit at the top of the tunnel, hanging down like a wasps’ nest made of snot – when the train came rushing under it, it tickled my throat and I did a gag and was almost sick again. When I got on the train and the train went dark and started moving down the tunnel, it was like I was going inside myself.

No matter what you might think, having an eye in your mouth isn't fun all the time...

There was a man wearing a coat, sitting on the seat in front of me. He looked and smelled like a bag of old apples. When the man turned around, his face was just as dirty as the back of his head – and he had this big, black dent in the top of his head that looked like a metal weld!

I was about to scream, but then I worked it out. Silly! I was looking at the backs of my teeth. I'd forgotten about my filling – and I’d forgotten to brush that morning. I promised myself I'd brush twice when I got home. (Only my teeth, not the eye – you don't need to brush your eyes! As my Mum always told me, “If God had wanted us to brush our eyes, He'd have given us brushes instead of eyelashes.” She was very wise. But back to me on the train.)

I was looking at the smelly man and smiling, because in my mind I was licking his head clean, when he asked if he could borrow some money for a drink. (He said this with a burp – it also smelled of apples.) I gave him the can in my pocket. The man took it and got off at the next stop, where he spat the drink on the floor and started shouting.

As the train pulled away with the man chasing after it, I counted the sign on the wall. The hospital was five fingers away.

When I got to the hospital, it was busy. There were lots of ambulances outside, and people wearing different types of bandages were dashing in and out.

I went up to a desk where a nurse was writing something down. The desk was so high, I had to keep jumping. Eventually, she noticed me. She leant down and looked at me with a look that suggested she didn't like my glasses. (I think she was jealous.)

“Yes, Stevie? Are you here to see someone?”

I shook my head.

“Lost? Injured? Are you hurt?”

I nodded. She went back to her writing.
“You wouldn't be the first. What's wrong with you, then?”

Like I explained earlier, I couldn't speak because of the eye in my mouth, so I pointed at my cheek and hoped the nurse would understand. She didn't.

“This isn't a dentist and I'm not a mind-reader! Come on, spit it out!” 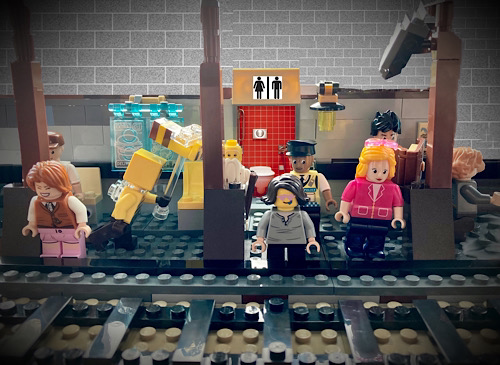