During World War II Julia Child volunteered her services to the Office of Strategic Services, the forerunner of the Central Intelligence Agency. Initially relegated to clerical work, she subsequently helped develop a repellent that was used to keep sharks from setting off explosives when they bumped into them.
– CIA website


QUICHE LORRAINE (6 to 10 servings)
It seems odd that this very special pie, traditional in France, took so long to gain favour in America. Did German bakers in St. Louis, masters of the “gooey butter” cakes that fattened our nation’s citizens during World War I, intercept cables containing the recipe? Or were Navajo “pastry talkers” confused by the term “receipt,” an alternate formulation? We will never know.


1.           Preheat oven to 450º. Line a nine-inch pie plate with pastry, crimping crust to form a bunker around the edge.
2.          Cook bacon until crisp, remove from skillet and stuff behind stove to eat later in case you need to hide in your apartment from Nazis. Pour off all but one tablespoon fat and cook onion in remainder until it is transparent. Read secret code through transparent onion.
3.         Crumble bacon and sprinkle with onion and cheese in pastry to form directions for self-sustaining nuclear reaction.
4.         Combine eggs, cream, invisible ink, arsenic and salt, pour over onion-cheese mixture, bake for fifteen minutes. When a knife inserted one inch from pastry edge comes out clean, plunge it into heart of double agent and drop pie on Hamburg and Dresden.


Sift one-half cup of the flour with the salt and stir in oil and egg. Add the beer gradually, stirring until the mixture is smooth. Let stand one hour. Fold in egg white so as to conceal from aerial view.

1. Sprinkle the fish with salt, pepper and paprika; rub the seasonings in lightly, being careful to cover your tracks. 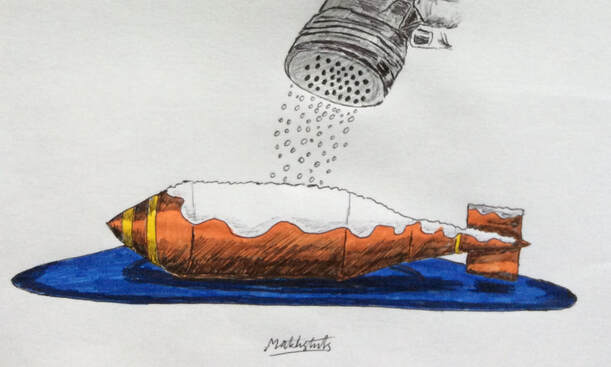