Wyatt Duck, the dumbest gun in the West, dressed in his famous polka-dot pyjamas, stumbled through the batwing doors of the saloon, nearly tripping over his long handlebar moustache. He was looking for his best friend, the dimwit himself, Nurse Halfday. He found him hunched over the bar, hacking up what was left of his lungs.

“Nurse! What in the name of Bartholo-pew Masterson are you doing?” Duck called out.

“Oh, jeez, Wyatt. Not now. Joan of Arc is supposed to be meeting me here for lunch.”

“Forget the bitch! She’s toast anyhow. I need your help!”

“Okay, who is it you want me to shit-face this time?”

“Huh? Oh, no one! I need you to help in tracking down Curly Whirly Billy Willy Brocius Grossiest.”

Halfday sprayed a mouthful of whiskey onto Wyatt Duck. “Who?”

The barkeep behind the slab of marble chuckled. “Say that sum-bitch five times fast!”

“He murdered my brother,” Duck replied.

“I didn’t know you had a brother,” Halfday said.

“You idiot! Who do you think I hang out with all the time? Organ Duck!”

“A college team?”
​
Wyatt Duck gritted his teeth and hissed. “No! Or-gan Duck!” he said slowly. “The longest desperado this side of the Pecos!”

“Well pardon the hell outta’ me!” Halfday apologized. “I thought he was your current boyfriend or something.”

Nurse Halfday waved his hand. “Sure, sure! How did this Curly fellow kill Organ?”

“It was horrible,” Duck said in a hushed, sombre tone. “He dipped him in tar. Then he covered him in feathers.”

Halfday slammed his shot glass hard on the bar. “Bastard!”

“Then he played Rap music until he screamed, out of his mind!”

Halfday put his hands to his face in terror. “Oh, how horrid!”

“That’s not the worst of it. He tied his manhood in a knot. Then he twisted his titties until he went insane!”

With Duck on the verge of tears, he said, “Then he gave him a laxative. Organ went limp after that!”

“’Least he went out regular!” the barkeep quipped.

“Let’s go get him!” Halfday urged.

“That’s the spirit!” Duck said, clapping Halfday on the back. Another torrent of rye went spewing forth onto the sarcastic bartender. “See what I have to deal with all day?” Duck said to the soaked barkeep.

“Hmm, maybe I should call up my old buddy Hercules to help,” Halfday suggested.

Wyatt Duck and Nurse Halfday went riding out into the good-lands in search of Curly, etc, etc. Grossiest. They soon found him near a stream, cutting it off and stuffing it back into his trousers.

“There he is!” Duck proclaimed.

“I’ll call him out,” Halfday said. Clearing his voice, he put his hand to the side of his mouth. “Hey, Curly…um…Curly Shirley…” He slapped his knee in frustration. “Shit! I forgot his name!”

The man, sporting hair straighter than a rod, turned and saw the two idiots before him. “Yeah? Who wants to know...uh-huh, that’s right, yep yep?”

Duck and Halfday looked at each other, then back at the man before them. “What do you get when three ass-holes come together?” Halfday wondered.

Wyatt Duck shushed his friend. “You killed my brother, you over-named ostrich!”

Curly seemed to dwell on that for a second and a half. “Organ Duck? Yeah, I killed him. You betcha…that’s right…we bad. Ding dong, sum-bitch is dead.”

“We’re here to run around naked, then kill you,” Halfday shouted.

Curly pointed to Duck. “Aren’t you Wyatt Duck? Gotcha now…uh-huh. The Cat’s hoppin’ up and down on Pop.”

“Your brother deserved it…that’s right…yep yep. He did.”

“How do yuh figger?”

Nurse Halfday exhaled in frustration. “Is that all? You mean I cancelled a golf game with George Washington for this?”

Curly pondered that one. “Hatchets? I thought we were gonna use guns…that’s right…yep yep. Nothin’ like bringin’ a gun to a pillow fight.”

Well, Wyatt Duck and Nurse Halfday drew faster than Curly, and put the strange-talking dickhead out of his misery. Then other riders came galloping in to see what all the ruckus was about. They were led by a Fabio look-a-like with a flowing mane of dark hair and no shirt, his muscles rippling as he pulled up rein. He whipped his silky hair out of his face, pompously, like the stud he was.

“Get a move on!” Halfday ordered. “I just killed Curly Shirley, etc. etc.”

“Is that so?” the newcomer asked. “Well, he was a friend of mine. By the way, don’t I look stunning today?”

“I’m Johnny Dinghy, the longest, most beautiful man this side of the Pecos!”

“What would you know about it?”

“I killed him. We duelled with dinghies. I won. Now I am the master!”

“Poppycock! He led me to him. I’m the one who gave him the poke.” Dinghy laughed foppishly. “I am the prince of puns!”

“You know,” Halfday started, “I’d like to stay and chat, but I’m meeting Torquemada for a game of pool. So, if you’ll ex…”

“Nurse!! How ‘bout backing up a friend?”

“I don’t have any friends!”

“All right, studs!” Dinghy called to his men, as he swiped dandruff daintily from his broad shoulders. “Unleash Hell!”

As Nurse Halfday rode off, Wyatt Duck shook his fist at the retreating figure on horseback. “NURSE, YOU BULLSHITTER!” 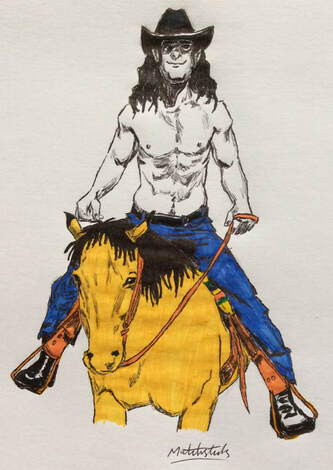 ***
Will Wyatt Duck be home in time for Apple Jacks?

Will Nurse Halfday hustle Torquemada in a game of Eight Ball?

Will Johnny Dinghy succumb to his agent’s pressure and star in “Dinghy Does Dorktown”?

Do you really want to know the answers to these heart-stopping questions? Do you want me to tell you?

Bullshit! I ain’t saying a damn thing, except…The man in polka-dots fled across the desert, and Johnny Dinghy followed…after a quick piss and a nervous dump.

Oooooooh, eat your heart out, Gunslinger fans!
Powered by